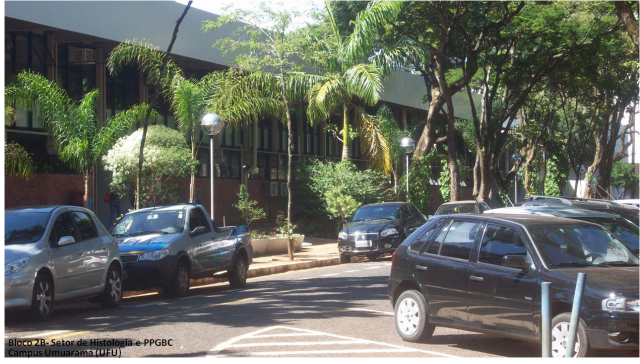 Facade of the building where most of the Programme is located

The Graduate Program Applied Structural and Cellular Biology (PPGBC) of the Institute of Biomedical Sciences (ICBIM) of the Federal University of Uberlandia (UFU) has offered the Academic Master Course since 2011.

The Program is based on the use of the multidisciplinary structure of the Institute of Biomedical Sciences of UFU – the academic unit to which it is allocated – and integrating still further with other units of the University, thus providing a solid, wide-ranging and diversified background for its professionals with an interest in the wide range of areas in Basic and Applied Science.

In a general sense, the students involved in the Program have a background in Biology, Biomedicine, Biotechnology, Medicine and Veterinary Medicine, Nursing, Nutrition, Odontology, Physical Education, and Physiotherapy. The Program is part of the area that falls under Biological Sciences I (CBI) from CAPES.

The permanent professors are involved with graduation and undergraduation students, in addition to presenting significant scientific output and integration with national and international research groups.

The Federal University of Uberlandia (UFU) has since its foundation in 1978, successfully adopted a policy that regulates the creation of Strictu Sensu Post-Graduation programmes in different areas. These programmes, which deliver highly qualified professionals who are ready to perform in research, education, and extension, have turned the university into one of the most important Institutions of Higher Education in the region (Triangulo Mineiro and Alto Paranaiba). The evidence of this success are the 47 Strictu Sensu Post-Graduation programmes running in 2018, 49 of which offering Master Degree (41 Academic and 8 Professional) and 20 PhD courses, coming to a total of 69 courses.

Following this progress, in 1992, the Institute of Biomedical Science has substantially contributed to the success of the University, through the implantation of the Post-Graduate Programme at Master and PhD level in the field of Immunology and Applied Parasitology. UFU has become a national and international point of reference in the field of basic research through the participation of professors of various departments of the Institute of Biomedical Science. However, the creation of a programme within the Institute of Biomedical Science became necessary, owing to the growth of research groups, especially in the field of Cell Biology. These groups had gradually been attracting financial resources through research projects approved by the main Brazilian development agencies, through partnerships with Brazilian and foreign Institutions and finally, through the recent expansion of the teaching staff in the area of Cell Biology at the University (UFU).

Thus, in the mid 1990s, the first talks on the creation of the Programme were started by a group of researchers of the morphology area motivated by the growth of scientific publication in the field of Cell Biology and the Government policy for renovation and expansion of the teaching staff as well as the possible inclusion of the Histology sector as a great anchor for the progress of this basic research line. Throughout 2009 and up to mid-2010, the dream became reality when the final project for the creation of the graduate program in Applied Cellular and Structural Biology was presented and subsequently approved by the University Council, the highest authority of the UFU Community.

Finally, the Post Graduate Master Degree Course in Applied Cellular and Structural Biology, ranked as level 3, was approved and recommended by CAPES during the 122nd meeting of the Technical-Scientific Board of Higher Education (CTC-ES), on 29 October 2010.  The graduate program in Applied Cellular and Structural Biology, which started the first class in March 2011, is currently composed of permanent and collaborator teaching staff and highly qualified academic and scientific contributors who, through funding agencies, have guaranteed financial resources to ensure the quality of their productions and the consolidation of the program’s research lines.

The graduate program in Applied Cellular and Structural Biology is open to physicians, biomedics, veterinaries, odontologists, biologists, nutritionists, physiotherapists, and all other professionals in the biomedical and health segment who have completed the subjects related to cell biology (Cytology) and, or, Histology during their graduate courses.